Unique, soothing, "we can hold a conversation" are the comments I consistently receive.  My musical hope is to be part of beautiful settings and to enhance the settings by playing rock & roll songs and Americana songs in the classical guitar style (often called fingerstyle guitar).  I will sing a few tunes and pick old time banjo tunes as well.  I enjoy a main stage as well as being in the corner.  Often, I'm part of the scene, playing as folks are enjoying beautiful food, wine, craft beer, and letting the stress vanish as the guitar music rolls on by.  In addition, my goal is to provide peaceful moments for listeners and my hope is that the peaceful moments will remind the listeners of the author of peace – Jesus.

Well, that's my bio - the music!  I play ~ 75 times a year at restaurants, wine tastings, weddings, by the soaking pools, country clubs and a few festivals as a solo artist and at times with other guitarists (see the "Bands" tab).  I'm a passionate nut.  I love fingerstyle guitar and work extremely hard at being the best guitarist I can be.

At the age of 38, Steve made a promise to his daughter, “I’ll learn to play guitar if you keep up your piano lessons”.  Little beknown to Steve, an overwhelming passion to play guitar would guide him for the next 20 years.   Steve began his guitar instruction at Forte Music Academy in Denver where he was fortunate to take lessons from Daniel Bolshoy, a world renown classical guitarist.  Next, Steve started writing songs and playing electric guitar in a Christian rock band that played monthly over a 12-year period for a Volunteers of America homeless mission in downtown Denver.  Steve met his wife Carol in a praise band where they played together for 7 years.

Steve became fascinated by a unique style of guitar called fingerstyle guitar.  He studied under 2 additional teachers, 7-time ASCAP instrumental music award winner T Martin Lesh and University of Colorado professor Owen Kortz.  Fingerstyle guitar, made popular by Chet Atkins, can be described as playing the piano on the guitar.  The melody, bass, and rhythm are delivered by one guitar often leaving the listener asking, “is all that sound coming from one guitar?”.

While working in a high stress corporate environment, Steve listened as the CEO would bring in chamber musicians to play.  This music would bring an unexplainable peace to the workers.  What a powerful impact - instrumental music, brought into an environment, seemed to sooth the soul.  With this idea in tow, Steve formed a duo, Two Guitars Telling A Story (TGTAS).  Guy Steagall, TGTAS duo partner, a guitar professional who toured nationally for 8 years, added a lead guitar part to Steve’s fingerstyle tunes.  TGTAS plays in the Denver country club scene (Castle Pines, Red Rocks, Cherry Creek), in fine restaurants, and for special events held in beautiful settings such as the Broadmoor and the Botanic Gardens. 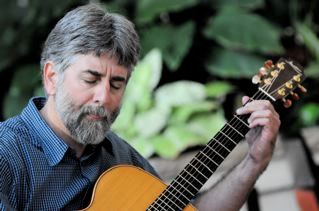